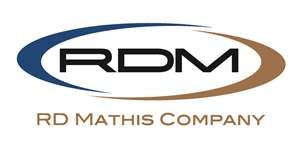 In recent years, thin homogeneous films of alloys[1], mixtures and compounds[2] have received considerable attention by workers in the fields of electronics and optics. This attention has been generated by the improved performance obtained from such films. The titanates hold the promise of extremely high dielectric constants, gallium arsenide of a wide band gap high temperature semiconductor, and lead-bismuth of high superconducting transition temperatures and fields.

The evaporation of these materials from a conventional boat or crucible source leads to films of graded composition because of their tendency to decompose or fractionate. In many cases the film can be reacted after evaporation to restore some of their properties, but in general, the final composition will be uncertain.

The first method is limited by size of the initial charge that can be used, and is further limited along with the second method by the additional processing required and the difficulty in obtaining complete reaction of the components. The third method requires the determination and adjustment of the temperature of two independent sources. All of these methods become increasingly difficult, if not impossible, as the number of components increase. All of these problems can be circumvented by the use of a grain-by-grain evaporation.

In the grain-by-grain method the material to be evaporated, be it an alloy mixture or compound, is prepared as a powder. (The author has found 100 to 200 mesh satisfactory for most materials.) Ball milling and sieving immediately before use will, in general, produce better results. The material thus prepared is then loaded into a delivery system in the vacuum chamber.

After pump down and outgassing, the material is fed in a slow continuous stream onto a suitably heated source. If the source temperature is adjusted to be much hotter than the temperature required to evaporate the most refractory component of the system, each powder grain will explosively evaporate as it arrives. A number of alloy films prepared in this manner when examined have shown composition and structure corresponding to the starting material. Thin films of gallium arsenide prepared in this manner and deposited on suitable heated substrates have shown not only stoichiometry, but doping levels commensurate with the starting material.

If an open source such as described by Holland[3] is used in conjunction with the grain-by-grain method, many of the powder grains arriving at the source are repelled away before complete evaporation. This results in poor quality films with many pinholes and adhered particles. To overcome this problem, a source similar to the multi-baffled box source[4] used for silicon monoxide has been designed.

Material is fed via a funnel (Figure 1) to a partially closed box. An optical dense baffle system prevents any material not fully vaporized from reaching the exit chimney resulting in a steady particle free vapor stream at the exit. Uniform heating of the source obtained by passing current through the entire length of the unit, prevents condensation of material between funnel and chimney, which would otherwise clog the source. Added radiation shields further increase the uniformity of the temperature, increase the efficiency and reduce unwanted heating of the substrate by the source. 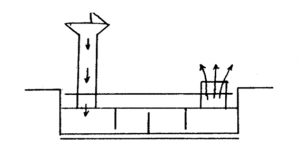 Present units fabricated are 3½ inches in overall length, 1 inch wide and 1 inch deep excluding funnel. Temperatures versus current characteristics determined on a number of similar sources are given in Figure 2. 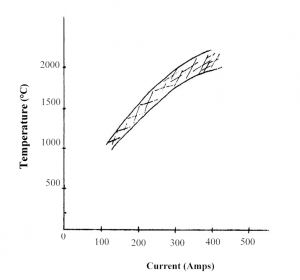 Several delivery systems have been used in conjunction with the grain source. The simplest to fabricate (Figure 3A) is an inclined V Trough fastened at its upper end into which the powder is laid. By mechanically tapping or electromagnetically vibrating the trough, the powder can be made to flow into the funnel. Rate can be controlled by adjusting the incline or the rate and amplitude of excitation. Where larger amounts of material are used, either a belt or stoker type feed can be used (Figures 3B, 3C). 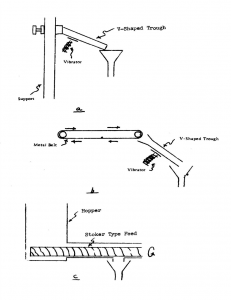 Films of a larger number of materials not easily deposited by other methods can be prepared by grain-by-grain evaporation. A source has been designed and successfully tested for this application. Films deposited with the source show the composition of the parent material despite their tendency to decompose or fractionate.